The best by test 1.e4 is the most common way to start a chess game. How can you expect to win as Black? Learn here the best chess openings for Black against e4!

I know how difficult it is for most of you, as club-level players, to pick up the right chess opening. If you like to beat your opponent, then you need to attack him, right? How to attack in chess is a topic for another lesson. So, the thing is you need something aggressive to start pressing him from the starting moves. That’s why today I have collected some aggressive openings for you. 🙂

Of course, it’s impossible to analyze deeply an opening in a single article. Nevertheless, I’ll try to present some key ideas and give you some general guidelines. 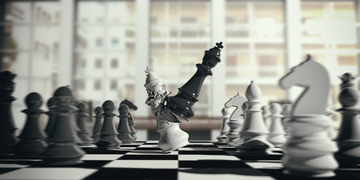 The most often played moves by White are 1.e4 and 1.d4, and we will see a couple of options for Black in both of these starting opening moves. 1.e4 is the most common and aggressive opening move and, for that reason, we will examine it first. So, let’s begin! Learn these chess openings for Black to do your best against e4.

This is the starting point from the Sicilian Defense, the Najdorf Variation, one of the best chess openings for Black against e4, and very aggressive! In this particular position, there are a lot of ideas and Black has to find a lot of antidotes! This is a very rich position, and if you’d like to learn chess, then you should study this opening. This is a very aggressive and fascinating position, which definitely can guarantee you a lot of great victories.

On Black’s side, there are a lot of big names and World champions like Bobby Fischer and Garry Kasparov. If these guys select this opening, then you can do the same. 🙂

The main idea is to play b5 and Bb7, and then start an attack on the queenside or in the center.

A very useful maneuver to remember is Rc8 and Rxc3!. The idea behind this maneuver is to destroy White’s pawn structure and weaken the e4-pawn!

I selected three cool games for you – these can help you understand the ideas a little better, and I hope you will start implementing this in your games as well!

This is the starting position of the Two Knights Defense ―one of the best chess openings for Black against e4. Black’s idea is to sacrifice a pawn to disorganize White’s pieces and start the counter-attack. It is a gambit (giving a pawn) and it’s not so important in the opening because, as we already know, developing the pieces is more important.

In this particular position, Black has a lot of options –Nd4, b5, and the main line Na5. I’m not recommending you to capture the d5-pawn immediately, because White can sacrifice his knight on f7 and follow a strong attack. The position is not winning, but it’s very unpleasant to defend for a long time – thus, I suggested Na5.

Again, I’ve selected three games for you, and I hope you will enjoy them as I did. If I’m lucky you will learn something from them, and I wish you good luck with your games! 🙂 Before studying opening variations, it is necessary to pay attention to the pawn structures that result from them. Both openings shown offer a high dynamic potential, which means that in many positions the material is not so important, but to maintain the initiative by activating our pieces.

P.S. Be sure to check the next lesson… We’ll see how to select an aggressive opening against White’s first move 1.d4 🙂 If you liked this article, please share it with your friends.