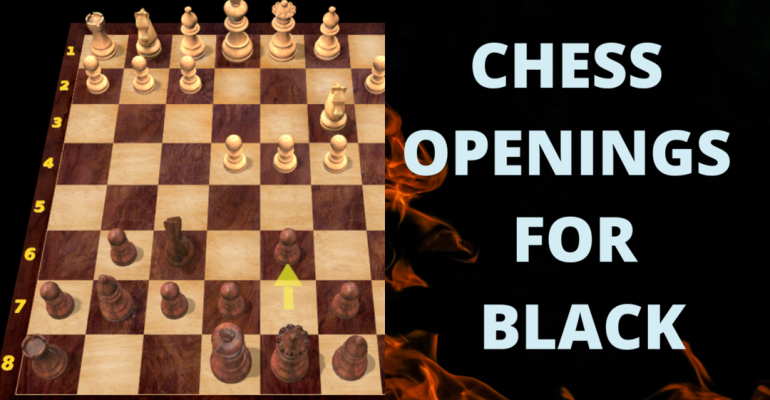 Chess openings for Black are the means to get, at first, equality and, then, to win a chess game. So, by learning the best openings, you can catch White on time!

When using Black, the primary objective is to create a solid structure that will handle any of White’s attacks.

The following openings have been known to be some of the best defenses that Black can opt for:

1. The King’s Indian Defense (One of the Most Aggressive Chess Openings for Black)

Black’s defensive structure in this opening will include a fianchettoed bishop on g7 and a knight on f6.

Both these pieces can also be used in the fight for the center if required.

To taste how it feels to beat 1.d4 as Black with the King’s Indian Defense, be sure to watch this GM Igor Smirnov’s video lesson. 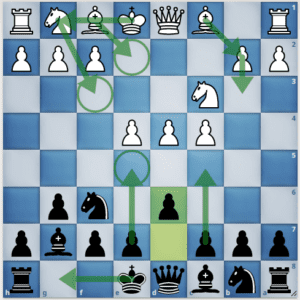 This is the most commonly played line as both parties have multiple ways to launch an attack on their counterparts.

While both sides will be looking to castle soon, whatever White plays back, will act on that.

If we see a move like 5.Nf3 or 5.b3, Black will instantly castle and prepare for an attack.

But if White plays 5.Be2, then we will see Black trying to destroy White’s center with a move like c5 or e5. 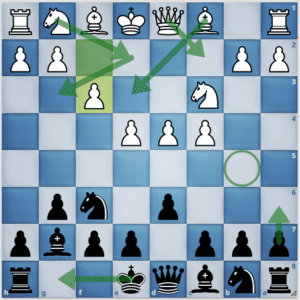 White rather keeps Black guessing in this position as to what will happen. We can assume a Be3 move in the future with both bishops aligned facing Black’s queenside is a sign of a future attack on that side.

Yet again, we can say White is also damaging his kingside after f4 as a preparation for a kingside attack.

For Black, the KID is one of the strongest openings to play in a chess game, so it will still be safe for Black to castle kingside and also prepare an attack using the queenside pieces.

Both players have a variety of moves that will keep their opponents guessing as to where the attack is coming from.

Black’s strong defensive structure gives him the advantage as the match continues because he can be aggressive knowing that the king is safe. 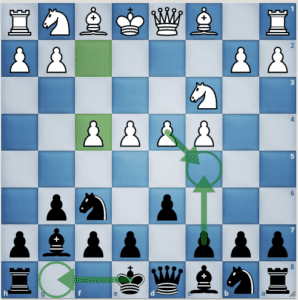 In this variation, White isn’t holding back on his path to have the center all to himself.

Black mainly has two options to approach this position. The first option would be to play 5…0-0 and just wait for White to make a mistake.

6.dxc5 0-0 7.cxd4. This then transposes into a gambit for Black as he loses a pawn for a major developmental advantage with most of White’s minor and major pieces not developed at all.

The Four Pawns Attack Variation seems like one of the most dangerous chess openings to face for Black, but it’s safe.

This White’s development is only focused on pawns, while important pieces are nowhere to be seen.

2. The Caro-Kann Defense (One of the Most Cautious Chess Openings for Black)

In the Caro-Kann, Black focuses on building a strong pawn structure rather than fighting for the center.

The defense should be utilized by chess players who know how to reserve their aggression for the perfect time.

You must be patient to play the Caro-Kann Defense, one of the most cautious chess openings for Black. 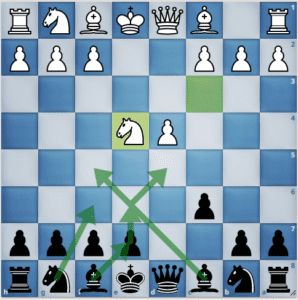 While White has full control of the center, Black has multiple ways to counter and create a solid position.

4…Bf3: This launches an attack on the knight, and the best way to go forth is to retreat with 5.Ng3.

This will force the bishop to retreat to the g6-square with a strong diagonal targeting White’s queenside.

In the future, Black will also be thinking of a structure that will see Nf3, e6, and Be7 or Bd6 played. This will be a solid structure for the black pieces.

White will probably opt to also develop pieces as there is no way to easily pass through Black’s defenses. 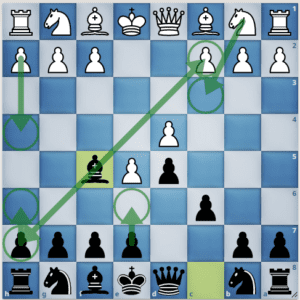 This variation creates a rather open structure where both players have attacking chances.

3…Bf5 is a rather developmental move for Black as it not only cuts through White’s queenside but will also act as a defensive piece on h7. This is in case Black chooses to castle kingside.

4.h4 or 4.g4. Both these moves for White signify that he is willing to sacrifice the kingside castling to harass Black’s f5-bishop and also the kingside in the long run.

Black also has the option to just castle queenside, as White will have a hard time trying to redirect pieces, mainly both bishops, because of Black’s pawn structure.

3. French Defense (One of the Most Famous Chess Openings for Black)

Black’s intentions are very clear, the e-pawn will be used as a backup in hopes to control the d5-square. 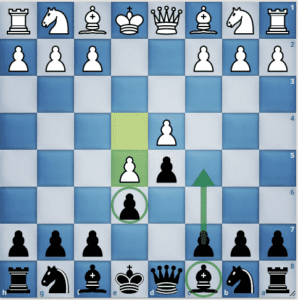 The advanced variation leaves Black with a backward e6-pawn and a light-squared bishop with only one square to operate with.

When dealing with a pawn chain, the best way is to start by attacking the tail of the chain.

This also offers three of Black’s minor pieces a space to operate. The 2 bishops on f8 and c8, also the knight on b8 will be able to target the queenside as part of their development.

For White, the main objective in this position will be to prevent having a pawn weakness in the center.

In the video lesson below, the RCA guest coach GM Marian Petrov will teach you how to deliver a strong attack against your opponent’s king in the center, in the French Defense: 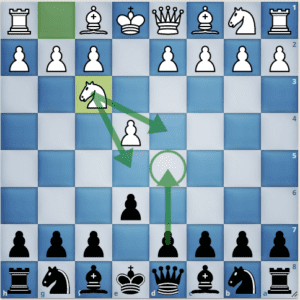 In the Knight Variation, White offers Black the opportunity to have a crucial pawn on d5.

3…d5: White can transpose it into the Advanced Variation again by playing 4.e5, then follow it up with 5.c5. This will act as a support structure for 6.d4.

4.exd5: Here both players just have an open position and have equal chances of controlling the game.

Black will probably feel like the winner since the opening stage, as the expectation from the first stage is to have White as the aggressor with a bit of an advantage. 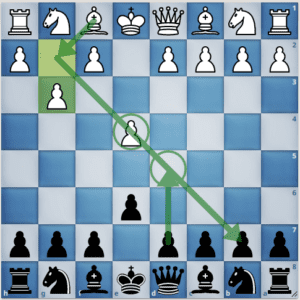 White’s main objective is to have a fianchettoed bishop on g2, cutting through the central light squares.

The bishop will be keeping an eye on the key d5-square, which Black wants to control.

The open structure again leaves Black happy, but with a cautious mind because of the bishop on g2.

The French Defense is one of the most famous chess openings for Black and you should learn it.

2. Russian Game (One of the Quietest Chess Openings for Black)

While this looks safe for both players, there are so many ways in which the position can explode. 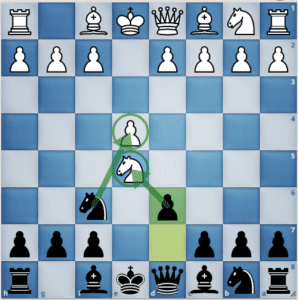 This is the most solid line in the Petrov. Black gains back his pawn with a developed d6-pawn.

We can also consider d6 as an intermediate move, as White would have been expecting Black to capture back the pawn on the 3rd move.

Both players will continue developing their pieces with no bloodshed with 4.Nf3 Nxe4 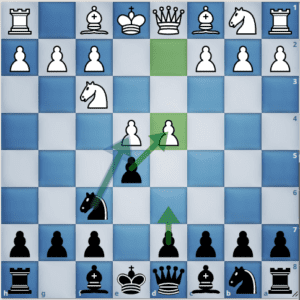 Here Black is offered the option to take either the e4-pawn or the d4-pawn.

3…Nxe4: In this position, both players will continue in a symmetrical position.

Black also has the option to transpose into the Philidor Defense by playing 3...d6.

This variation allows Black to decide how the game will continue.

Simple Trick in the Petrov 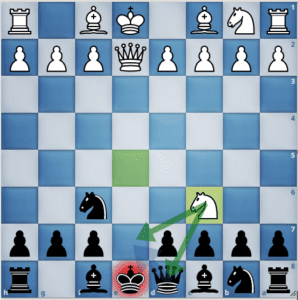 This is a simple trick that mainly works against lower-rated players. So, they might know what Petrov is. But they don’t know when to stop copying White’s moves.

4.Qe2: This move makes them panic and forces them into retreating the knight.

Once the knight has retreated, White can play 5.Nc6+, winning the queen.

You can learn more tricks like this one for Black, studying the lesson the 5 Best Chess Opening Traps in the Petrov Defense.

1. Sicilian Defense (One of the Most Ambitious Chess Openings for Black)

Black goes for a flank opening. The Sicilian is currently the most frequently used defense among all available openings for Black in chess.

This is mainly due to the multiple variations that can arise from this position, which offer Black both defensive and offensive chances.

To learn more in-depth, study the lesson Sicilian Defense: All You Need to Know. 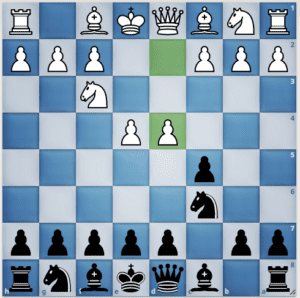 Black gets offered the opportunity to capture the d4-pawn. As this was Black’s goal from the start, the best option is 3…cxd4.

White will follow that with 4.Nxd4. Here Black can opt to continue with the open Sicilian by playing 4…Nf6

The Open Sicilian offers Black multiple transposition abilities. As a result, making it a hard variation to deal with for White, as he will have to find ways to prepare for a lot of variations to avoid surprises. 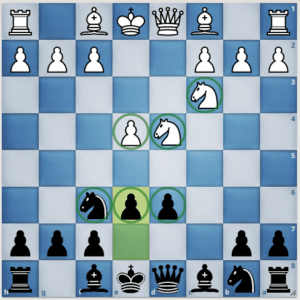 This variation has been commonly used among some of the world’s best chess players.

If the Keres Attack is implicated by the move g4, then Black will have no option but to castle queenside.

Until Black eliminates White’s pieces, especially the dark-squared bishop, it will be hard to castle kingside. So, the best position for the black king is either the center or the queenside.

The Sicilian Defense is one of the openings that you definitely must learn to play to look for your best chances to win a chess game as Black.

When using the black pieces, the counterplay is the only solution to avoid defeat. So, you must be well prepared with black pieces.