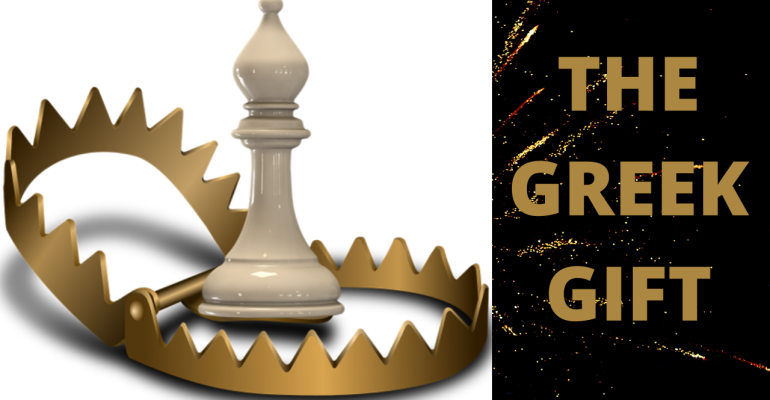 We will look at an important checkmate pattern called the Greek Gift, sometimes referred to as “the Classic Bishop Sacrifice”. This tactic is the most dominant attacking theme against short castling in chess.

This “Greek Gift” consists of the sacrifice of the bishop for the h-pawn to destroy the opponent’s castling. Usually, the defending side has no choice but to accept this gift. Although, regardless of whether the sacrifice is accepted or not, the side that won the pawn is left with an advantage in the position. And in many other cases, this leads to a forced victory.

“Whoever sees no other aim to the game than of giving checkmate to one’s opponent will never become a good chess player.” Max Euwe.

One of the most famous examples of this sacrifice is found in the Edgard Colle-John O’Hanlon game played in 1930 at the Nice Masters tournament.

We can see that White has used the Colle system as an opening. And both sides maneuver calmly and have no problems. However, the game is about to take an unexpected turn.

Black has routinely exchanged on e4, thereby freeing up space for his knight on d7. So far, we could say that it is a very quiet game without anything special.

We have reached a critical position. It is White’s turn. The most logical move could be to capture the pawn on d4 with one of our pieces. Here Stockfish suggests 12. Bc2!? and he considers it to be of slight White’s advantage. However, here White played… 12. Bxh7!?

This is the move that gives birth to the Greek Gift. White takes advantage of the fact that the black king has no defenders by castling it. In the game, Black accepted the gift. Not accepting the gift does not improve the situation. For example, 12…Kh8 would follow 13.Ng5!, attacking f7 and threatening to follow up with 14.Qh5!

Black now has a difficult decision to make: To go back to g8 or advance to g6. In the game, Black played 13…Kg6??, which turns out to be a terrible blunder. The correct move was 13…Kg8 and, after 14. Qh5 Qf6!, with a complicated position.

Conditions for the Greek Gift to Be Effective

Now is the time to apply what you have learned. Try to solve the following exercises.

Answers to the Exercises

Before you sacrifice the bishop, you must ensure that the position details presented above are fulfilled. The first variation that you must analyze in your mind is the capture of the bishop and the advance of the king to g6. If you see that it works, then explore the rest of the lines.

Now if you want to know how this Greek Gift sacrifice works in practice against the French Defense, you can watch the following video. 😀💪

The Most Important Guidelines in Chess

A Perfect Chess Attack in the Italian Game