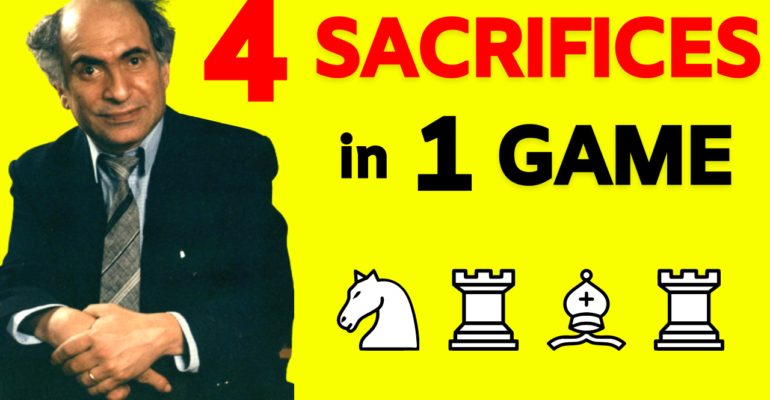 We’re going to learn about a game from Mikhail Tal where he sacrifices not one but four pieces to crush his opponent and deliver a beautiful checkmate!

In this lesson, I’d like to share with you one of the most fascinating games I saw over the last couple of months at least, played by none other than Mikhail Tal, playing White against an unknown opponent.

If you enjoy sacrifices in chess, like the ones Mikhail Tal did, look at the 5 Greatest Queen Sacrifices of All Time.

Mikhail Tal starts with pawn to e4, Black responds with pawn to c5, and this game is truly a great example of attack. And that’s Tal at his best! That’s why we love his games. He’s demonstrating how to attack and use various sudden tactical opportunities.

We are going into the Sicilian Defense (Najdorf Variation), the most popular variation among Sicilian fans. The Najdorf was played by Fischer, Kasparov and many other elite chess players. 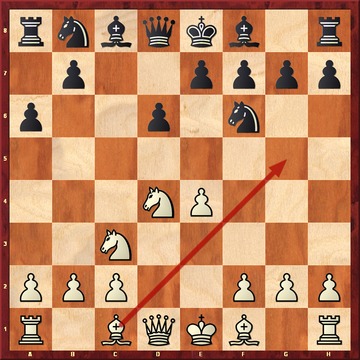 Bg5 was considered the main line in the past. Nowadays, it’s a bit less popular, even though it’s still a very good option for White. The intent is pretty clear, you’re putting pressure along the f6-d8 diagonal and, potentially, you are developing your pieces of the queenside, so that your king is ready to castle there in the future.

White is establishing central control, as well as preparing potentially the attack in the center, by playing pawn to e5.

Black simply ignores that and plays b5, which is a very interesting move. At first, it may seem like a blunder because, after e5, it feels like Black may be in trouble because the knight is pinned down to the queen, and now it’s attacked by the pawn.

Therefore, it may seem like Black is in a big trouble and is going to lose his knight, but in reality it’s not the case because Black has a very interesting counterblow here, which is 9…Qc7.

The queen escapes from the pin and now if White takes the knight here, Black can respond with Qe5+, which delivers a double attack to the white king and bishop. Therefore, White does not win a piece here because Black takes it back right away.

Tal didn’t do that in the actual game, but is good to see why this move does not work for White.

Let’s see what Tal did in the actual game. He played 10. Qe2 instead, protecting the e-pawn in the center; therefore, Black can’t take it anymore. And Black had to move the knight away from the attack, by playing 10…Nfd7.

This exciting game is entering into the middlegame… Learn how to play it by looking at How to Play the Middlegame (The Ultimate Beginner’s Guide).

First Critical Moment of the Game 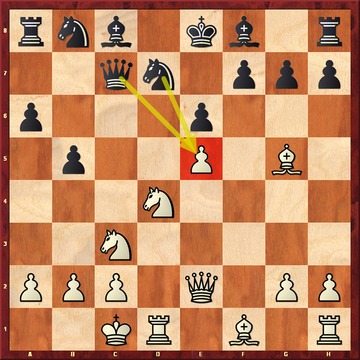 This is the first critical and interesting moment of this game. By playing Nd7, Black attacks the central e-pawn twice. At first, you may feel like you want to protect this pawn somehow. But taking into account that White is ahead in development and Black made a lot of pawn moves in this game, it gives you an idea that you may consider starting your attack here quickly.

For the sake of this attack, you may be willing to sacrifice a little bit of material. Therefore, White simply castles queenside, letting Black to capture the central pawn.

In the actual game, Black just continued his development, which was the right approach.

If Black tries to capture the central pawn, let’s say by capturing it with the knight, then White has a very interesting combo. 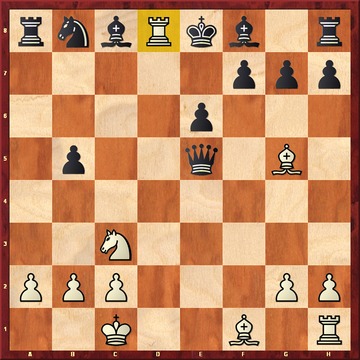 White starts taking on b5 with a knight. After that, there are many great moves for White. But the most brilliant one is to take with the queen on e5, deflecting the queen from defense of the black king. After that, White is delivering a great checkmate with a rook and a bishop! This is a really great line which didn’t happen in the game. But it was a very interesting sideline which could happen.

1) Mikhail Tal Sacrifices a Knight to Open Up the Position 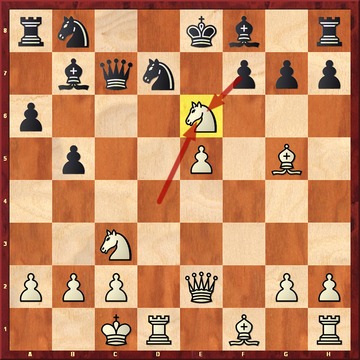 Now there is another interesting position here. Even though White is slightly ahead in development, it feels pretty difficult for White to start any quick attack here.

Black seems solid and well protected. However, in this case, we may recollect the second rule of the attack. The first rule was quick development and the second one is trying to open up the position. You want to have open lines and diagonals for your pieces, so that they can attack your opponent’s king in the most straightforward fashion.

With that in mind, White played another move, this time sacrificing the knight.

This time, White is attacking this pawn with the queen and, all of a sudden, we can see that White creates the first checkmating threat. Black certainly noticed that and said okay let me just protect this pawn by playing queen to b6. 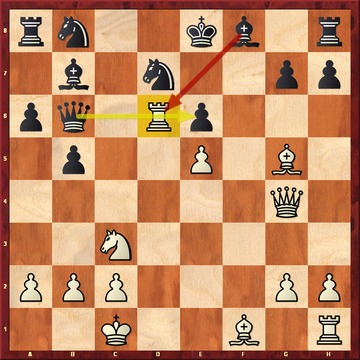 Now Mikhail Tal ―The Magician from Riga― sacrifices another piece. In this case, the rook on d6.

By capturing the rook, Black puts the bishop in an unfavorable position where it interferes with the queen protecting the pawn.

Temporarily, the pawn on e6 is undefended and White takes the opportunity by grabbing it and delivering an attack to the king.

The king has to go, and now, even though the king is completely exposed and certainly White would wish to keep attacking it, nevertheless Black is also having significant material advantage and, therefore, White needs to be careful trying to find the best way, the most efficient way to finalize this attack.

3) Mikhail Tal Sacrifices a Bishop to Activate the Other Rook 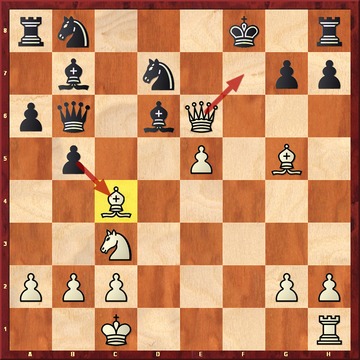 This time the threat is to check mate with Qf7, supported by the bishop. We have this battery established on the c4-f7 diagonal. Of course, Black could just grab this bishop, and then the question is why would White want to give up his bishop.

The reason of this sacrifice is that the bishop is vacating the f1-square for the rook. Now White doesn’t spend any extra time and plays Rf1+, delivering an attack to the king.

As Mikhail Tal said many times, his motto was to sacrifice pieces to gain more time, to bring his pieces into the attack quickly. While the opponent’s pieces are far away, they cannot help the king. This is just another cool rule of attack.

Now, the only normal way to cover the king would be going with the knight to f6, which brings us to the final rule of attack. 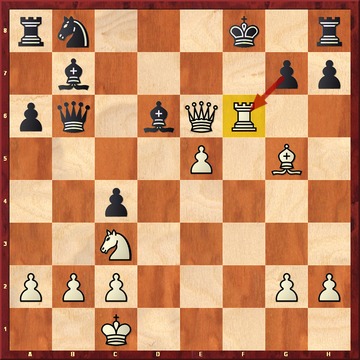 When you need to calculate a lot of possible options, calculating them can be a challenging task. But when you start off by looking at checks, you make your task a lot easier.

When you deliver a check, there is only a single response usually that your opponent has, and that’s why you can calculate it in a much easier way.

So, White takes on f6, sacrificing the second rook. This time, it completely exposes Black’s king, so that White can deliver a beautiful checkmate with the bishop on h6.

Puzzle of the Day

It’s Black to play this time. It’s also Mikhail Tal, playing Black. We can see that like in the previous game, White is a bit behind in development and his king is vulnerable. Nevertheless, White is ahead in material, and Black needs to find a way to crush White.

If you can find the winning move, write it down in the comments below.

By the way, if you’re an advanced player, then you have an additional task. Don’t specify just a single move, but try to provide the entire winning line. It actually involves a couple of following moves until we reach the checkmating position.

If you enjoyed this lesson, you may also enjoy another lesson about the 5 Greatest QUEEN SACRIFICES played by Magnus Carlsen! He’s not the guy who would sacrifice often, but when he does, it’s a great game.

Only Mikhail Tal Can Make Consecutive Sacrifices like This!

Fischer DEMOLISHES His Opponent with a Queen Sacrifice in an Opening