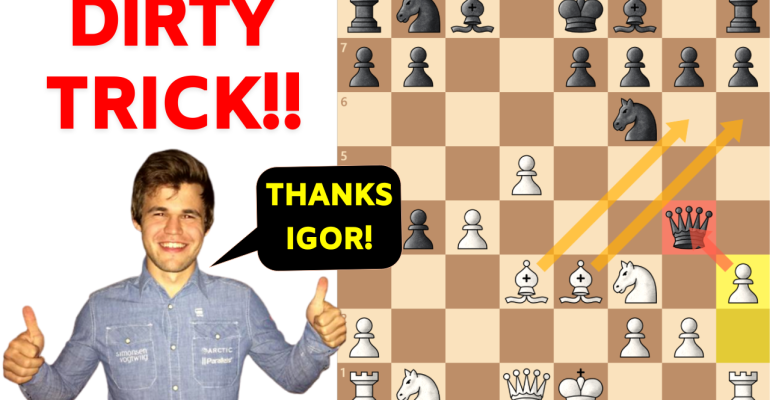 Today I’d like to show you a game played by the world champion Magnus Carlsen in which he used our dirty chess opening trick to defeat a strong grandmaster in nearly 10 moves!

Magnus Carlsen was playing White against Sergei Zhigalko, and he played the Portsmouth Gambit (we call it the Smirnov Gambit) against the Sicilian Defense which happens after the opening moves: 1.e4 c5 2.Nf3 Nc6 3.b4. It is a variant of the Wing gambit. White sacrifices the b4-pawn for a semi-open b-file and sometimes an open c-file, along with control of the center and quick development.

In contrast to the regular Wing gambit, after 3…cxb4, White will play 4.d4. In many positions d5 is a threat, forcing the knight to either go to a5 or back to b8. This move also frees up the a1–h8 diagonal. If Black declines the gambit, White has the threat of bxc5, or even sometimes b5.

Do you think Magnus Carlsen would have watched our videos and played this? Share your thoughts in the comments below. 👇